HOW THE PROJECT CAME INTO LIFE

This project is a cooperation between the village of Pobiedna and the LCP centre, situated 2 km from the village centre of Pobiedna. The project to rebuild the run-down playground in the village square of Pobiedna, originated from an idea of the village’s chairwoman. She had approached the LCP crew last year, asking for their support in realizing this community project.
The construction work has begun last week and is planned to be continued through the months of June and July. The volunteers from LCP who work at the construction site have been so far joined each day by the people and especially the children of the village.
Starting June 19th the LCP crew had invited guests from all over Europe to join the project. Starting from this day, we will give a live coverage of the ongoing work on this blog, updated with new photos and text every 2nd to 3rd day. 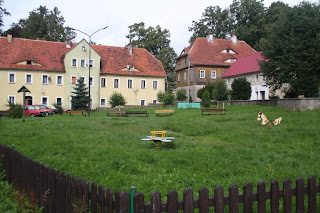 The village square and future playground in Pobiedna before the start of the project; the local municipality had no financial means to rejuvenate the area. 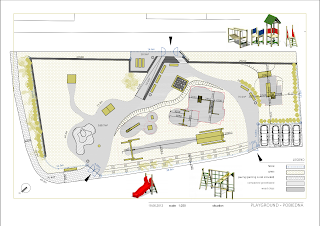 Here you can see the map of the future playground including the legend and pictures of the different children’s playing apparatus; the draft for the renovation of the playground was designed by friends of the LCP, a Czech architect and two civil engi­neers from Berlin. The draft was put forward for consultation with the responsible authorities of the village and subsequently adapted with their considered input. Before starting the construction work it was approved by the responsible district office.
Posted by Playground for Pobiedna at 6/20/2012 01:10:00 PM

Playground for Pobiedna
The playground is constructed as a cooperation between the village of Pobiedna and the Lighthouse Center Poland (LCP), situated 2 km from the village centre of Pobiedna in Lower Silesia, Poland.

The blog will be updated at least every 2nd to 3rd day, with new photos and a few lines telling what happened the last days.